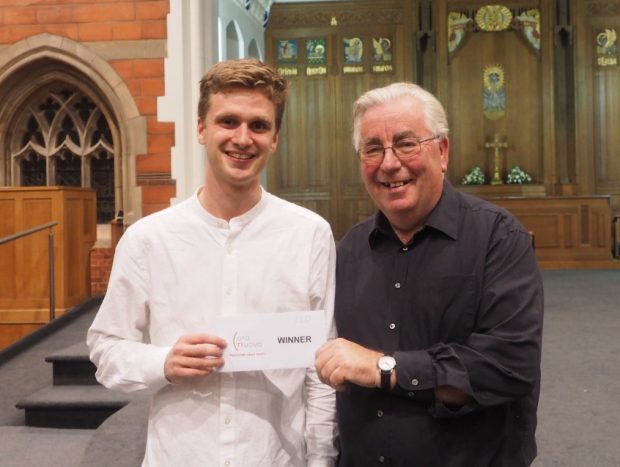 A dazzling performance saw one young cellist claim the title of Sussex Young Musician of the Year and a Tradoak bursary of £1,000.

“We are delighted to once again support talented young musicians and provide the bursary for this wonderful competition.”

Leo, whose father is from Petworth, drew some of the loudest applause of the evening.

He showed great sensitivity and controlled vibrato on the mournful yet moving Moeran Prelude and nimbleness on Beethoven’s Sonata Number 5.

Second place, and a prize of £500, went to classical guitarist George Robinson, 23, from Chichester.

Judge Toby Purser told Leo and George: “You both brought something truly mesmerising to the performance.”

Addressing all four finalists he said: “All four of you have something incredible to give to the music world.”

The joint runners-up were Maria Luc, 22, and Andy Martin who both receive £250.

Andy, on flute, coped well with the pace, whistles and shrieks of Ian Clarke’s highly entertaining Great Train Race. He showed a more reflective and passionate side on Lenky’s Aria from Eugene Onegin.

The evening also included a performance of 16 pieces of popular music by the Coro Nuovo choir under the title Earth’s Beauty, directed by Andrew Rees.

Two of the choir’s best pieces in a fine performance were Czech songs, the delicate and soothing Napadly Pisne and the uplifting charm of Proc Bychom.

As part of his prize, Leo has the chance to perform with Coro Nuovo and be paid as a professional.

The second judge was Catherine Kent, chair of Coro Nuovo.

Tradoak was formed by Neil Peskett in 1990.

We supply quality reclaimed and air-dried oak beams to the construction industry and direct to consumers.

Our website provides examples of some of the work we have undertaken and products we can supply.

As an independent family business we are passionate about supporting our local community.